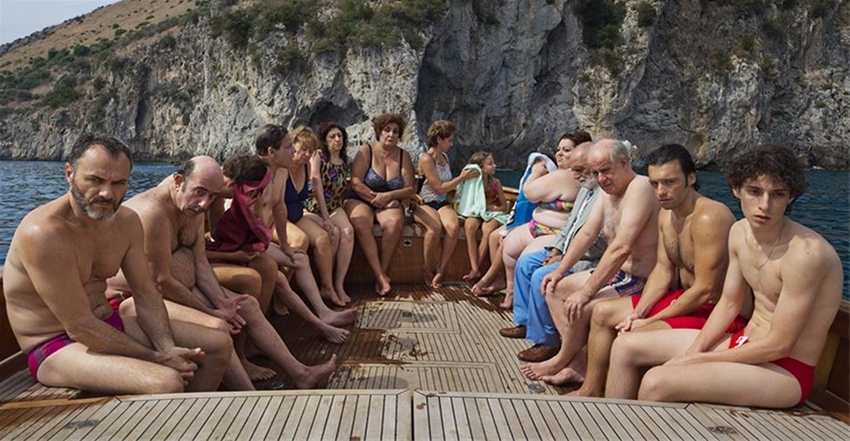 Diego Armando Maradona, Federico Fellini, Antonio Capuano are the Paolo Sorrentino’s divinities. The director presents his very personal and brave “amarcord” in competition at the Venice Film Festival. The Hand of God is “an intimate and personal film, a fun and bold coming of age.”

Fabietto (Filippo Scotti) is the 17-year-old alter ego of the director, who lives in Naples in the 1980s and is looking for his place in the world. Suddenly, he has to face the tragic death of both of his parents, intoxicated by carbon monoxide in the family’s holidays house, where he didn’t go just by chance, because he decided to go watch a match at the stadium. Chance or miracle, it has to do with “the hand of God”, as someone tells him at the funeral.

The film is split in two clearly distinct parts. The first one is fun and colorful, and goes Fellini-like in its description of a large family, including the neighbors, adopting a tone of comedy. The vitality of the mother (Teresa Saponangelo) who cracks phone jokes and juggles with oranges; the smart humor of the father (Toni Servillo) who had a son with another woman but always manages to be forgiven. Within this light dimension, Fabietto also discovers sex, dreaming about aunt Patrizia (Luisa Ranieri), a peculiar woman who ‘encounters’ San Gennaro and will end up in a psychiatric hospital. In the second part, the protagonist feels alone but never desperate, and has to deal with many bizarre circumstances (a smuggler friend, the neighbor baroness with whom he loses his virginity, director Antonio Capuano). All this helps him discover his vocation for cinema and will take him to Rome. And watching, observing is the essence of his identity. In fact, when his parents die, his desperation explodes because the doctors prevent him from “seeing” them.

“I came to the Lido 20 years ago at the beginning of my career with One Man Up,” says the Oscar-winning director, “and I like to think that this is a new beginning. This is a film that I couldn’t tell like all of the others: sentiments and emotions had to speak.” “I’ve been promoted by Paolo from big brother, as he normally defines me, to father,” adds Servillo. “Twenty years ago I was with Paolo and he told me that at some point it would find the right distance to tell this tragic episode of his life, and he added ‘I will ask you to play the father.’ It is clearly very touching to receive such a proposal, and he never asked us to play exactly how his memories go. He just gave us some hints. The most beautiful one was to look like me and Teresa were very much in love, because this love is the memory that Fabietto will treasure when he has to start walking on his own feet.”

Why did you decide to tell this story at this exact moment in your life and career?

At some point you take stock. Bukowski once said “gods have been good, love has been beautiful, and sorrow came by the truckload.” For me is the same, in my life as a young boy I had much love and a lot of sorrow. I turned 50 and I thought I’m mature enough to face such personal matters.

The title comes from a famous quote by Maradona from the World Cup in 1986 to justify a goal he scored with his hand.

It’s a beautiful quote, even paradoxical if said by a soccer player who refers to the only part of the body that he can’t use during a match. The ‘hand of God’ is the chance or a divine power for those who believe. And I believe in the semi-divine power of Maradona.

Did you ever speak of the project with him?

No, it was easy to get access to him. I wanted to show him the film, but he is no more.

Is it true that there has been a legal issue with the title?

Not exactly. Maradona didn’t even know anything specific about the film, we just receive some general complaints from his team, but nothing concrete.

What did you feel when your idol died?

What does one feel when someone dies? It’s called sorrow and I’m not able to express it by words.

How did you discover the talented Filippo Scotti?

I was looking for a good actor who could almost direct himself alone. Filippo is also as shy as I was at 17, and conveys the same feeling of uneasiness.

You’ve been very brave by working on such a personal and painful story.

I’m very timid in my life, but here I had to prove a different kind of courage, especially in the writing. On the film set, my fears almost vanished, because I had to deal with many concrete problems.

The film marks a stylistic turn as well.

It just couldn’t be like my other films. It had to be simple, essential, let sentiments and emotions speak for themselves. I have a clear memory of my adolescence, that’s why the camera doesn’t move that much. In the end I almost regretted to have move it so much in the past, I realize that things happen anyway. The first part is still indebted to what I did before, we’re still within an oneiric dimension, then I freeze and the film lands on a more realistic form.

Antonio Capuano was really key in your career.

Yes. In the tons of contradictory things that he told me, there’s one quote that struck me: being sorrowful is not a license to become a creative. It’s been very useful. He loves the conflict and mostly the good things come from conflicts and not from peace. From him I learnt an endless vitality that I’ve never reached, although I tried to.

A wonderful period with the advent of Maradona, and I’m using the world advent not by chance, because there was something mystical. Maradona brought freedom with his charisma and way of being.

Do you thing this film will be liberatory for you?

I hope so. Cinema, as I say in the film, is good for nothing, but helps to get distracted. Almost nothing is good for something, except the vaccines.

The Hand of God, produced by Lorenzo Mieli and Paolo Sorrentino for The Apartment, will be released in selected cinemas on November 24th in Italy, and will be available on Netflix on December 15th.