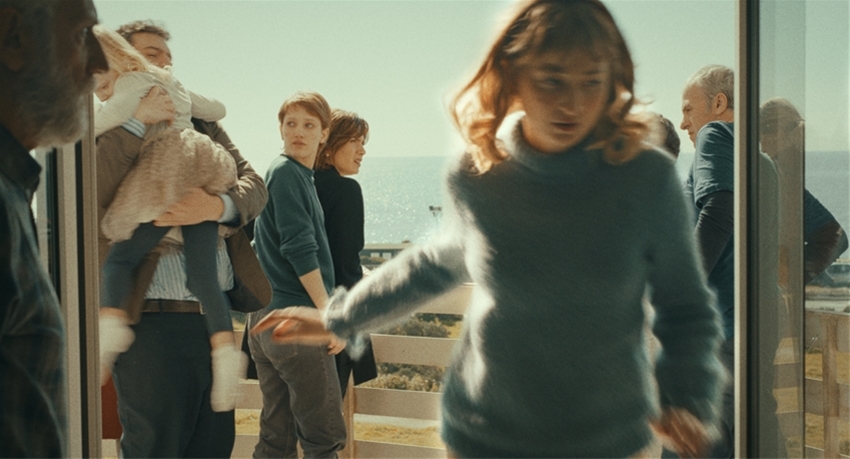 Extended families, polyamory and unexpected life choices stand at the core of the chechovian The Peacock’s Paradise by Laura Bispuri, presented in the Orizzonti competition of the Venice Film Festival. After premiering twice in the Berlinale competition with Sworn Virgin and Daughter of Mine, Bispuri gets to Venice for the fist time. Produced by Vivo Film and Rai Cinema, in association with Colorado, in coproduction with Match Factory, the film’s structure resembles a theatre piece and shows a very free spirit in looking at a family gathering which progressively unveils the complexity of choices and sentiments.

“The Peacock’s Paradise” follows Nena’s family, who reunite in their house by the sea to celebrate her birthday. Everybody is there: her husband Umberto, their children Vito and Caterina, cousin Isabella, their daughter-in-law Adelina, Caterina’s ex Manfredi with his new girlfriend Joana, their granddaughter Alma, and Lucia, the maid, with her daughter Grazia. Finally, there is Paco, Alma’s peacock, who surprisingly falls in love with a little painted dove: an impossible love that will force the whole family to reckon with their feelings.

Bispuri states: “The Peacock’s Paradise is a small journey into intimacy and the authenticity of the human beings: a film on an extended family where everybody talks to each other, but nobody really listens. Until an unexpected even forces the protagonists to show themselves for who they really are. And it’s like if their life suddenly turns into ours, a mirror of sentiments that makes us reflect on the complexity of human relationships, the mystery of loss, the thousand voices speaking within us, the importance of silence, our constant search for love.” The cast includes Dominique Sanda, Alba Rohrwacher, Maya Sansa, Carlo Cerciello, Fabrizio Ferracane, Leonardo Lidi, Tihana Lazovic, Maddalena Crippa.

Moving from a traditional family gathering, you unravel the complexity of unconventional relationships.

The film wishes to frame the nuances of the human soul like in a kaleidoscope. All ages are represented, all types of relationship. What surprises us most are the older characters, especially Nena who, behind a somewhat rigid and austere appearance, hides an extended life project.

This relationship between matriarch Nena, the husband and their maid Lucia unhinges the certainties of the group.

There’s a three-person relationship which is made out of harmony, a combination that puts into question the idea of traditional family. At first, they are all very rigid and stay within their formality. Nena has her own paranoia about order, she’s a perfectionist, but in the end, she kneels down in front of everybody and opens her heart.

These loves are based on a very strong complicity. Nena and Lucia belong to two different social classes, but that’s not important, their bond is very intense. The film, penned with young scriptwriter Silvana Tamma, explores the theme of free love and that of impossible love, like the peacock’s for the dove. And it also tackles the theme of loss. Every character in this story has to confront it.

It was Silvana Tamma’s idea. I believe it’s the only film with a peacock that is the protagonist, a full-fledged character with a role and an evolution. What does it represent? It’s a symbol of beauty and vanity. All of the characters are peacocks in the first part of the film, then they all reveal themselves.

This time Alba is Adelina, a woman who always manages to say and do the wrong thing. She tries to be likeable, but doesn’t succeed. She brings the wrong grift, and just says it. She’s a young woman who had a serious health problem, she experienced fear and it’s out of tune, out of place. I worked on the tender and ironic side of Alba, we always have a lot of fun in facing new challenges. I don’t like actors repeating what they’ve already done before.

How did you reach out to Dominique Sanda, a mythical actress?

I fell in love with her many years ago in The Garden of the Finzi-Continis. While we were writing, I thought she would be an incredible Nana. I tried to look for her, and it’s not been easy. She’s been living in Uruguay for the past 20 years. I finally found her, I sent her my films and this script. She liked it and she loves to play in Italian. She’s been brave, she came in Italy last February despite the pandemic, and had swabs every day on the set.