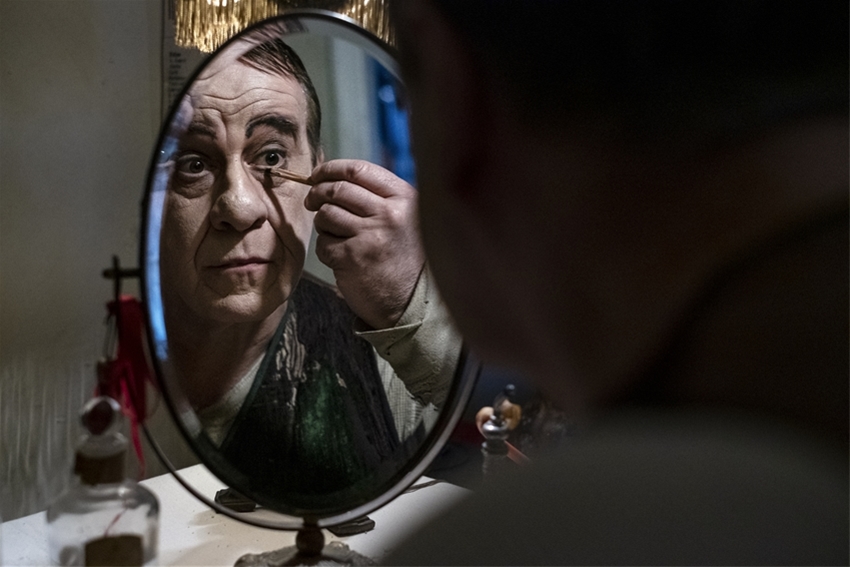 The most mature and accomplished film by Mario Martone, The King of Laughter, in competition at the Venice Film Festival, has been welcomed with a warm reception. The story, in the form of a comedy, tells of Eduardo Scarpetta (1853-1925) and his tribe of theatre actors, his legitimate and illegitimate sons (including Eduardo De Filippo), the rich Neapolitan society of the time, the lawsuit brought by Gabriele D’Annunzio for plagiarism when Scarpetta dared to make a parody of Iorio’s Daughter. The interweaving of art and life, the dressing rooms as an extension of the family house, the patriarchy with its ruthless immorality, but also the transmission of knowledge that will give us the genius of Eduardo De Filippo and his extraordinary poetics.

Toni Servillo impresses with a remarkable performance, and his supported by a number of other actors including Maria Nazionale, Cristiana Dell’Anna, Iaia Forte, Antonia Truppo, Eduardo Scarpetta (who is a descendant of the Scarpetta dynasty), Roberto De Francesco, Lino Musella, Paolo Pierobon, Gianfelice Imparato. The technical crew is impeccable too: cinematography by Renato Berta, editing by Jacopo Quadri, costumes by Ursula Patzak, art direction by Giancarlo Muselli and Carlo Rescigno. The film takes the viewer into a vortex of vitality, energy, and contradictions. Behind the scenes of the artistic creation.

The film also gets close to the feelings of little Eduardo, an illegitimate son of Scarpetta, born from a relationship with his wife’s nephew. Martone states: “For all of his life, Eduardo De Filippo didn’t want to talk about Scarpetta as his father, but only as a playwright. When his brother Peppino wrote a ruthless portrait of him in an autobiographical book, Eduardo never talked to him again. Just before dying, a friend asked him: ‘Now that we are old, it’s the moment to talk about it: was Scarpetta a strict father or a bad father?’ The only answer was: he was a great actor.”

The idea for the film was born as you were working on your previous The Mayor of Rione Sanità?

Yes. I was struck by the importance of the theme of paternity denied in that theatre piece by De Filippo, as much as in Filomena Marturano. Together with Ippolita di Majo, we started thinking that there was a mystery there that was worth facing by talking of an extraordinary tribe revolving around a theatre genius, an immoral father who pushed himself to the limits.

What kind of man was Eduardo Scarpetta?

A mythological and primordial figure. He had sons from his wife, his wife’s sister, and his wife’s nephew. He sent them all to school, both boys and girls, and they all became actors. Eduardo De Filippo became the genius of Italian theatre as we now know. Scarpetta was a devourer: he devoured Pulcinella, the Treatre San Carlino, and his life, the sons who couldn’t bear his surname and enjoy his heritage, but to whom he mysteriously transmits the powerful seed of creativity. This also comes with a lot of pain. How did these women and kids live? We tried to imagine it. For instance, all of his kids at some point in their life had to play the character of Peppeniello in Miseria and nobiltà who, at the end of the comedy, embraces the real father, played by Scarpetta himself. There’s something unconsciously sadistic in this.

Naples is the core of the narration, and the Neapolitan songs too.

By the end of the nineteenth century, theatre in Naples was flourishing, cinema was just born, the Lumière brothers filmed the city in 1985 and I show those images at the beginning of the film. The King of Laughter is a choral novel with a city in the background and many characters. It’s written like a comedy, like the theatre by Eduardo De Filippo. Music is an integral part of the film like a sentimental journey, because some of the songs have nothing to do with Scarpetta. Naples uses the music as a mask to put oneself out there in the life.

A choral novel with a magnificent actor like Toni Servillo at its core.

The character of Scarpetta gave me the opportunity to work with Toni, whom I’ve known since forever. This film has been waiting for us for 40 years. We started off together, with the avantgarde theatre, with the plays by Enzo Moscato.

Who are the enemies of Scarpetta?

On the historical level, there’s a new generation of authors like Salvatore Di Giacomo, Roberto Bracco and Libero Bovio who all testify against him at the process. But the discourse is larger that this, every ageing artist knows what it means to be outdone. Every artistic gesture is destined to be overcome. And this is true for all of us.

His son Peppino is among his enemies, too.

Peppino De Filippo was abandoned for 5 years when he was only a kid. He also wrote a book about that, A Difficult Family, which displeased Eduardo.

Why did Scarpetta want to challenge D’Annunzio.

He did it out of hybris. The encounter with D’Annunzio was recounted by Scarpetta in his own autobiography as we show it in the film. It’s an ambiguous meeting because it’s not clear whether the poet authorizes the parody of Iorio’s Daughter, and in fact he didn’t. When the piece is staged, the audience revolt against Scarpetta, and his downfall starts from there. We were interested in that melancholy, until the scene of the process, the last great performance that makes him win the battle, but it’s there that his depression starts. The assessment of Benedetto Croce stated that Scarpetta’s was in fact just a parody, thus something small and useless. This helped with the process, but humiliated him nonetheless.

The contrast between comedy and tragedy has always been present in our culture.

We are living a very different historical moment, but this dialectic still exists today. Which topics one can make fun of, which one can’t. Things always change, theatre is always transforming. In the future, when some social issues will be solved, it will be different again.

The women in the film are much more than simple supporting characters.

Those were atypical women – states Ippolita Di Majo – living within a patriarchal context, but they studied and worked. His daughter Maria becomes a dramaturgist, Titina a great actress. His wife Rosa confronts him.

We talk about paternity – adds Martone – but also about maternity. Patriarchy is terrifying and implacable, but there’s also the power of female figures, a solidarity among women which is triggered to handle the situation.