“Il buco” and the temporal bewilderment of the abyss 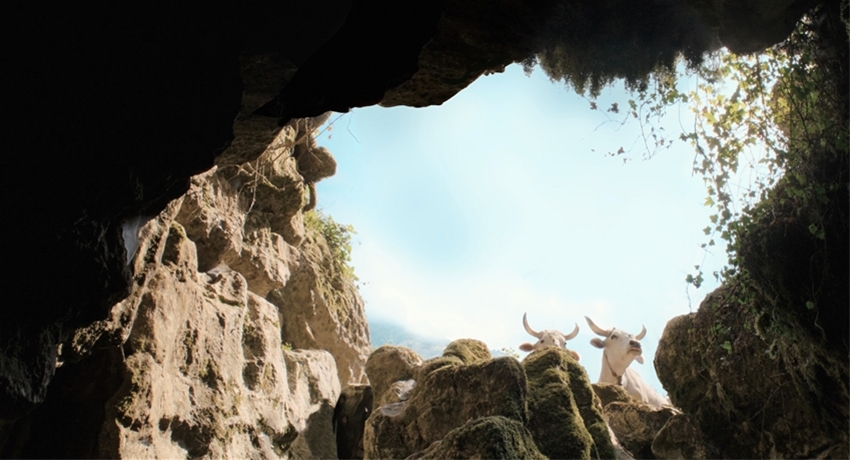 Michelangelo Frammartino’s third feature Il buco, in competition at the Venice Film Festival, sets its visual dimension from the very first frame, a gaze from the bottom up from the inside of a cave towards the sky. However, the film – and the camera’s mission – turn the perspective upside down, and descends towards the absence of light.

“The cave forces you into a specific relationship with time. Down there the temporal dimension is different: there’s no day-night cycle, no thermal changes, something hormonal happens. There’s a temporal bewilderment that belongs to the abyss,” explains the director.

Frammartino can see beauty and knows how to convey it on the big screen with an epic mise-en-scene that plunges into the warm belly of the Bifurto Abyss in Calabria, a cave of 687 meters that, back in 1961, the Piemonte Speleological Group explored to conquer the second deepest cave of the time.

“It looks like a brave film because it enters the abyss: the first times in the cave for me were full of terror. I am of Calabrian origins and Calabria is a land with an important shapeless dimension, it’s a contradictory land: the shapeless is the dimension of our Italian culture. Verticality has always been one of my fears, and I would have never thought of making a film like this,” Frammartino says.

Giulio Gecchele, 84, who headed the mission and now walks on the red carpet in Venice adds: “I think that speleology has changed from a technical point of view, but from a philosophical and ideological standpoint it’s still the same. It’s something that you do together, in which everybody has to take care of his own fellow as long as the other could be safe. It’s a demanding enterprise, you crawl in the mud and you’re always wet. The reason to penetrate a cave remains the same: make a discovery available to everybody, besides going to places that men have never reached before.”

The spectacular cinematography of the film is by Renato Berta, who worked with masters like Godard, Resnais, Rohmer, Rivette, Malle, Téchiné, Huillet-Straub, De Oliveira, Gitai). The aesthetic beauty of Frammartino’s vision is an ecstasy of the gaze, that most possibly reach the apex in the sequences in which, down in the cave, the speleologists set some magazine pages on fire to let them fall down to the bottom of the last deep hole, a practical necessity for the mission that allows the director to set suggestive frames of the vertical cave. However, this visual epic choses a totally different pace for its narration, which is slow and totally devoid of words, avoiding the pathos that goes with the images.

“The cinema of the real deals with something that is ungovernable,” states Frammartino. “The fascination of the cave is that you don’t see the characters, but their gaze shapes the space, a space which is out of control. Renato Berta worked on the light with the awareness that he could possibly lose control. He didn’t go down the cave, but there was a team of speleologists who, through a coil of optical fiber, was sending him the images. He was sitting in a dark room, outside of the film set, as if he was the final viewer in the cinema.”

Giovanna Giuliani, co-author of the film, explains: “We thought of adding actors, but I took the responsibility to go with speleologists only. The human dimension takes a step back in the cave, because it’s a non-anthropized territory. It’s an experience in which you test the limits of your endurance.”

The film was produced by Doppio Nodo Double Bind with Rai Cinema. “We didn’t shoot by thinking of the Venice competition, and we were actually surprised, because this is first and foremost karstic cinema.”