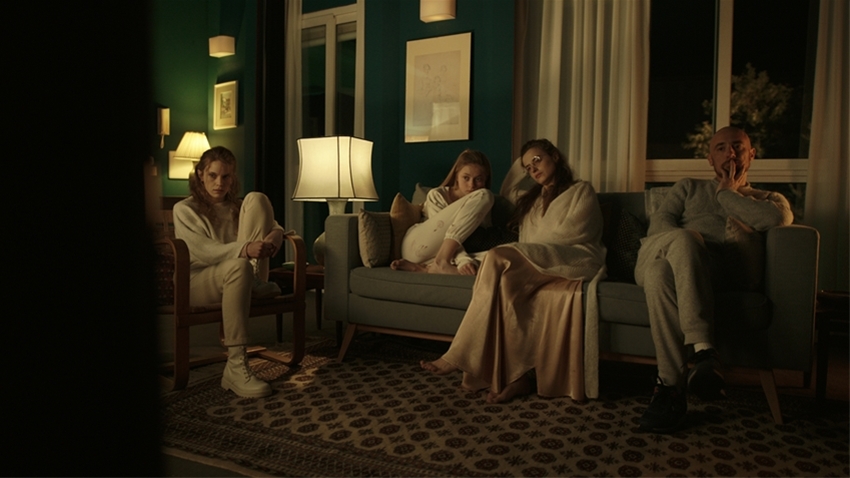 After Bad Tales, awarded for Best Script at the Berlinale, twin brothers Fabio and Damiano D’Innocenzo were very much expected in competition at the Venice Film Festival. With only three feature films, the 33-year-old brothers from Rome are widely considered the enfants prodiges of Italian cinema. Their new film, America Latina, aims to confirm their status as original auteurs who project a ruthless and tender gaze on to contemporary society, and the middle-class in particular, portrayed in its ordinary monstrosity. It’s their trademark in fact, and the risk of being deemed too rhetorical or symbolic is always around the corner.

The title plays with the location, the area around the city of Latina, described as a place of “swamps, reclamations, dismissed nuclear plants, humidity.” Massimo Sisti (Elio Germano, their regular actor) is a wealthy dentist and a good father, despite a few drinks too much with a friend. He lives in a strange villa in the desolated countryside, with a disquietingly-shaped swimming pool and an entrance stairway towering over the void. The man loves his wife Alessandra very much, and his two daughters Laura and Ilenia, too. “It’s during this unshakable and quiet springtime that the unforeseeable breaks into his life: one day like any other, Massimo goes to the basement and the absurd takes possession of his life.”

It’s not possible to tell more than this in order not to spoil the ambiguous mechanism that drags us to a world concurrently made of love (?) and violence, a mental world moving between two levels with frequent visits to the basement. “Love means rejoining our ghosts and obsessions, in the uncertainty of the future: crazy variants in a deeply tender film. Moreover, I fell in love during the shooting,” sums up Fabio D’Innocenzo.

The film, produced by The Apartment, Vision and Le Pacte, “it’s not a thriller – explains Damiano – even if it’s mysterious and willingly ambiguous. Maybe we can call it a psychological thriller. We love genres, which have precise rules that ramp up the story. America Latina expresses the will of not repeating ourselves with something we’ve already done before, because we want to keep uncomfortable to ourselves as well.”

Elio Germano is the leading actor and bears the whole film on his shoulders, surrounded by female figures that are either evanescent or indecipherable. “The twins called me to do a work not of construction, but of deconstruction. I had to allow the camera to get inside me, I had to lose myself in the mechanism, let myself go. Massimo is the opposite of the strong and winning macho. It’s the opposite of what we are asked to be in this society. His delicacy and sensibility allow him to dig into his soul.” A character unlike the one Germano played in Bad Tales, but who ends up dramatically anyway. Also in this latest film, the directors explore the violence within the family context. “There’s a final funnel that sucks in the character,” states Fabio. “But we can say that the female element is what is saving us, love succeeds in putting together our broken pieces. Love unrequited, platonic, brotherly – all kinds of love ramp up our life. When we love we feel better and make the world a better place.”

The many cinephile references include Sofia Coppola, Peter Weir, Hitchcock, Bergman, and Ermanno Olmi. And the world of painting in the art direction and the accurate framing. Fabio adds: “We had the first idea of the film while we were in Berlin waiting to know if Bad Tales was winning any award, so to keep the anxiety under control. That’s how we thought of a less fragmented film, a straightforward work with a character who lives the story and makes us experience it, too. It’s an immersive story taking us inside one’s mind, a journey at the end of a men, to put it with Céline.”

Elio Germano explains the title: “America Latina is an antinomy between an ideal America, representing how we would like to appear, and the real place which is a swamp. How do you make a performance in our society? By hiding some parts of yourself in the basement. Sensitivity is not fashionable and the sensitive, fragile man discovers this fracture, this bipolarism. He attempts a journey to find himself again.”

Another key figure is the character of the father, played by Massimo Wertmuller. Fabio states: “The encounter between father and son is a key scene. The relationship of the protagonist with is father is a castrating one. It’s an element that we’ve often added to our films. Sons must interpret the errors of their parents and turn them into something good. That father, an alpha male, leads a sad and desperate life. His son chose another path for himself.”

Regarding the film location: “It’s an impossible villa, a wrong one, like a crooked tooth,” comments Damiano. “We found it among the leftovers of the art director. It was unpresentable. It mirrors the ambiguity and duplicity of the character.” As for the ambiguity of the narration: “The dialogue with the viewer for us is necessary. Not everything can be explained and immediately understood, but can be digested over time, and this is a way to have an endless film, even if it’s only 90 minutes long, like a soccer match.”