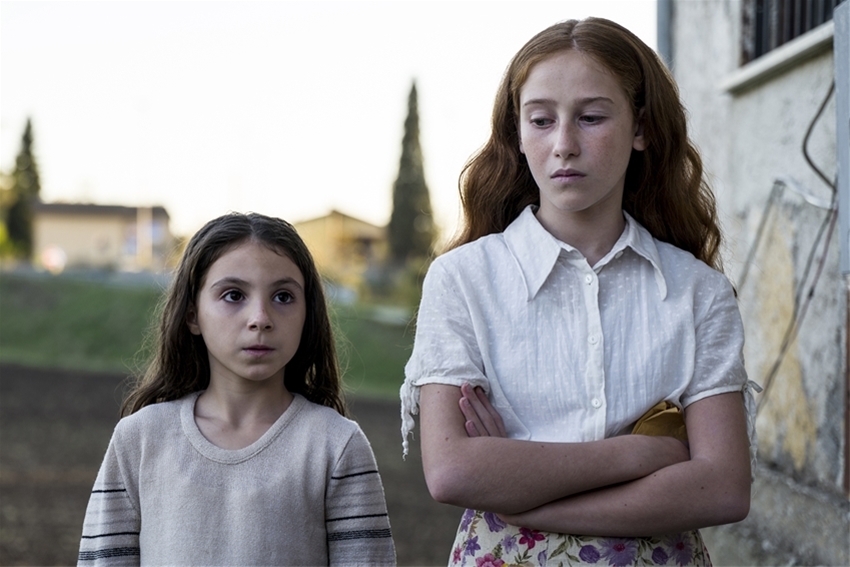 L’arminuta, meaning “girl returned”, is a 13-year-old girl who grew up in the city within a wealthy and cultured adoptive family, until she was finally returned to her biological mother in the countryside as if she was just like a parcel. She then finds herself to face a large and severe family, and to share the bed with her younger sister Adriana, with whom she soon gets close. The adoptive mother avoids her, but keeps on sending money and oranges, maybe because she feels guilty.

The award-winning novel by Donatella Di Pietrantonio (2017) has been adapted into a feature film, the only Italian entry in the Official Selection of this year’s Rome Film Festival. Director Giuseppe Bonito focuses on female figures in this complex and archaic story, echoing My Brilliant Friend.

Sofia Fiore and Carlotta De Leonardis are the two young protagonists, Vanessa Scalera and Elena Lietti plays the two mothers, Fabrizio Ferracane the domineering father who surprises us with unexpected moments of humanity. The film, as in the novel, tells one year in the life of the protagonist, her love for writing, the sorrow of the abandonment, the heartbreaking nostalgia for the sea and her life from before, the will of understanding at all costs. The director states: “I’d like the narration to convey two elements in particular. On the one hand, the gaze of the girl; on the other hand, the burning magma of her lacerating sentiments. The girl faces one of the deepest fears for any individual, that of losing the persons who give us happiness. It’s also a story about the contrast between fate and human will.”

Bonito contends that he could mirror himself in the story, although it’s a mainly female-driven one. “It touched me deeply and powerfully as a journey towards awareness. It’s an extraordinary and intense book, a carnival of sentiments and conflicts. Reading it is like looking at an old photograph with faces, landscapes, situations that you’ve known from your childhood.” The story is set in the mid-1970s in the Abruzzo region, between the coast and the inland. “It’s almost exclusively a story made of women and a challenge for a male director, that’s why with the scriptwriter Monica Zapelli we focused on the four female characters who are described realistically but at the same time bear a strong symbolism.”

The film tackles the dualism between the city and the countryside, richness and poverty, dialect and the Italian language, modernity and the archaic world. Bonito adds: “This duality has influenced the choices in the cinematography and the work with the actors. I interviewed 3000 little girls from Abruzzo. Sofia Fiore made an impression for her imagination, she told me what she was feeling instead of what she was seeing from the window. Carlotta De Leonardis was the only one who was able to speak dialect fluently, all of the others seemed to refuse it, one of them even started crying. The two girls chose each other and have become friends.”

Vanessa Scalera comments: “I’ve known that peasant world, that sentimental contrition, that lump that never explodes, the muted and sorrowful eyes of many families that I met. I come from a small town in the South, I know those eyes that say everything without uttering a word. The daughter is a big chance for redemption of my character.” For Elena Lietti, “Adalgisa is a mystery to be solved. A mother who returns her daughter is easy to judge. In order to understand her, I delved into a certain era, social and cultural context. In this way I managed to understand her mind.”

Novelist Donatella Di Pietrantonio adds: “The real work that the characters do is looking for reconciliation, those endless middle positions between the opposites that are unbearable, incompatible with survival. Desperately, they try to reconciliate and the girl more than the other, she yearns a synthesis between the biological mother, who gave her away, and the other mother, who returned her at some point.”

Girl Returned is an Italo-Swiss coproduction, produced by Roberto Sbarigia for Maro Film, Maurizio and Manuel Tedesco for Baires Produzioni, Javier Krause for Kaf with Rai Cinema. The film was made with the support of Lazio Cinema International – Regione Lazio and MiC.