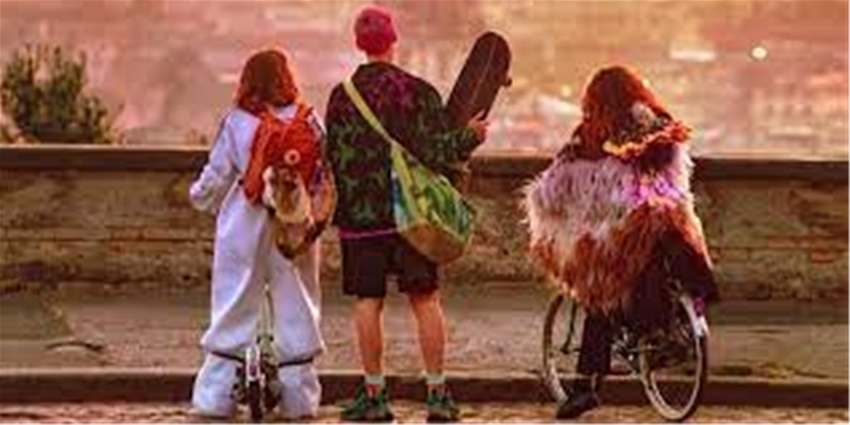 He shows up at a birthday party for a few seconds playing himself. At the Rome Film Fest, during the presentation of the first Italian Amazon Original, Dog Years, in the Alice nella città section, all attention was for him, singer Achille Lauro. For the film, streaming on Prime Video from October 22nd, he also wrote and sang his new single Io e te.

Dog Years is a coming-of-age teen comedy directed by Fabio Mollo, starring Aurora Giovinazzo (Freaks Out), Isabella Mottinelli, Federico Cesari and Luca Maria Vannuccini. The film tells the story of Stella, a clumsy, cynical, imaginative and tormented teenage girl. “After a life-changing car accident involving a dog, she convinces herself she must count her age in dog years: one year of her life counts for seven, and now that she’s turning sixteen, she is a centennial. For this reason, Stella thinks she has not much time left to live and pens a bucket list of all the things she would like to achieve before she dies. Her best friends Nina and Giulio are in to help her, while the charming Matteo, as shy as her, could be her first true big love.

Fabio Mollo comments on the challenge of portraying the universe of this group of teenagers. “To me this was a triple somersault. I was terrorized by the responsibility of shooting the first Italian Amazon Original. I started off from a screenplay that touched me deeply with its accurate dialogue and believable, interesting characters. Stella’s world is psychedelic, her dreams come true, and this is already a beautiful tribute to cinema. Many things drew me close to Stella’s character. Comedy and drama overlap in many instances, putting them together was a risk. We selected a great ensemble of actors; we’ve been inclusive and didn’t put limits to our choices. We locked up in hotel for three weeks to rehearse, and that helped to build the right atmosphere. The actors supported one another, and that’s one of the things that makes me prouder.”

This film marks an enthusiastic and happy moment for Aurora Giovinazzo, but one full of anxiety, too. “As with Stella, I don’t like to bear all the responsibility on me, but if it finally brings big satisfactions, then I’m happy. I’m an actress and a dancer, I’m always on the lookout for new stimuli. At first, it’s not been easy, I was looking for Stella but couldn’t find her. Then something clicked towards the start of the shooting, when I decided to be true to myself, unrestrained, ready to run and think like her. In the end she suffers from anxiety, a universal feeling, a shield we use to protect our certainties. Stella feels insecure in every single situation, she never feels at ease, but thanks to her friends and her newfound love things will change.”

Elegant and charismatic as always, Achille Lauro tried to interpret at best the mood of the protagonist in his song for the film. “The story has been the starting point, I’m grateful that Amazon thought of me. A creative work always entails the projection of an idea towards the reality. Its most consistent achievement, being it for a film or a song. I don’t exclude anything, I like to try different things, but cinema is a serious thing and I leave it to whom has the skills to be an actor. However, I always put myself to the test, I wrote two books and worked on two documentaries, yet to be released. I’d love to direct a feature. What I can say to the teenagers is that who gained success is someone who had failed many times before.”