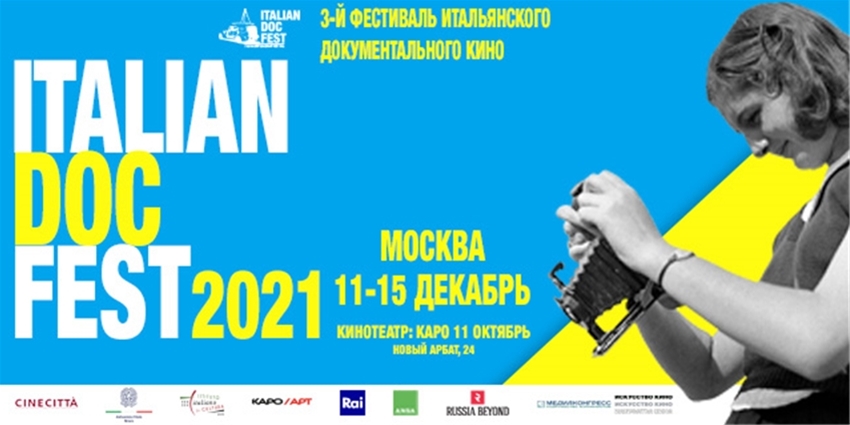 Proving its successful proposition, the Italian Doc Fest is back again to Moscow. The event dedicated to Italian documentary is organized and promoted by Cinecittà, bringing to the Russian capital a selection of titles from the international festivals, with a special attention to the cinematic language. A window for dialogue with an important reality in the audiovisual market. A chance for our film production to confront a demanding press and audience, where documentary can find its way thanks to universal themes and characters, and our cinema can deepen a cultural exchange with great potential.

The festival is organized by Cinecittà under the patronage of the Italian Embassy in Moscow and the Italian Institute of Culture, with the media partnerships with Rai and Ria Novosti for Russia, Ansa and Russia Beyond. Seven films will fly to Moscow as part of a selection that focuses specifically on the mythology of showbiz and that explores the edges of cinematic language.

The Rossellinis by Alessandro Rossellini is the true revelation among the Italian documentaries this year. The story of a family, which is unique like all families, but headed by the father of modern cinema. A cinematic, experimental, irresistible therapy. Another master of cinema is at the core of Fellinopolis by Silvia Giulietti, working as a peeping tom through the backstages of some of Fellini’s key works. Django & Django by Luca Rea and Steve Della Casa illuminates the westerns made by Sergio Corbucci. As everybody knows, his films have been the main references for Quentin Tarantino’s cinema.

Italia. Il fuoco, la cenere by French directors Celine Gailleurd and Olivier Bohler tracks the evolution of Italian cinema in its first 30 years of history, from the late 19th century to the talkies: the birth of peplum, the great divas, the melodrama, the first “kolossals”. A surprisingly magical film, with images from many Euopean cinematheques. A lot of music in other two documentaries in the selection: We Are the Thousand by Anita Rivaroli chronicles the event, and the magical consequences, of 1000 musicians performing Foo Fighters’ Lean to Flight in Cesena.

Caterina Caselli – Una vita, cento vite by Renato De Maria is the portrait of a singer, songwriter, producer, manager, a woman of extraordinary charisma who has made an impact with the songs and the artists that she discovered and launched all over the world. What is history and how it leaves a mark on people, is the big theme of La macchina delle immagini di Alfredo C. by Roland Sejko which, through the true story of a camera operator working during the Fascist regime and then under the Communist dictatorship in Albania, unveils a shared destiny and responsibility.